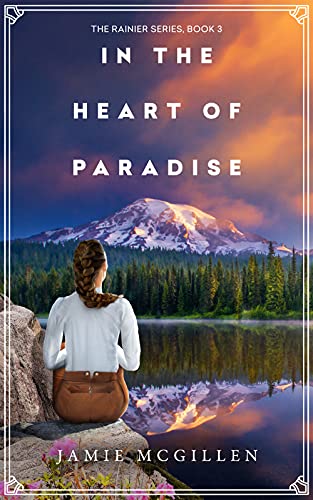 Today I am reviewing the 3rd book in the Rainier Series by Jamie McGillen. I was graciously accepted by Jamie to be part of her launch team and I am so glad that I was, because I can read and review this book before the book is available! Now on to the review

Jamie continues the writing style of the second book In Light of the Summit by switching between two stories. This time she of course continues Anna’s story but, also expands on Elizabeth Grayson’s story. Those of you who have read the previous book “In Sight of the Summit” would know that Elizabeth Grayson is the woman who Anna’s brother, Levi, was courting before ultimately marrying Anna’s childhood friend Emily.

In the beginning, Jamie comes out with the heavy-hitting topic of mental health. She enlightens the reader on how women who had what we now know to be OCD, manic episodes, or any other mental illness would be at the mercy of either her husband or father. Due to the ever-present threat of being admitted to an insane asylum women had to keep their mental health struggles a secret. In this story, Elizabeth is one of those women. Throughout the book, we follow Elizabeth’s journey and struggles of becoming a nurse in the late 1800s with the added struggles of having “doubting disease”. We also watch her deal with the heartbreak of her courtship with Levi ending and the prospects of the bud of new love.

Now, moving on to Anna’s story. To recap at this point Anna has attempted to summit Mt. Rainer twice. The first time she fails due to her ill-fitting equipment. The second time she succeeds but, not without surviving an attempted murder.

During the third book, she has plans to hike to base camp to meet with Fay Fuller to discuss the women’s mountaineering group they plan to assemble. But, once she finds out she is pregnant she is confronted with the reality that climbing her beloved mountain may be harder than she thought. We also follow Anna’s rough pregnancy and her struggles with the timing of becoming pregnant. As a mom myself I can relate to what Anna has to endure with her pregnancy and how hard it can be when things don’t go as planned.

Of course, I knew I would love this book like I loved reading the rest of the series but, I have never read any book in 4 days! I quite literally could not put it down. I would sit while Natalie watched her shows, Daniel and Jason would play video games, and just read. I want to thank Jamie for fostering a love of reading with her amazing books. If you have not read this series you should.